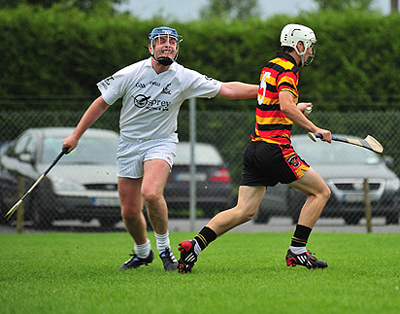 A long-range last minute point from midfielder Shane Ryan earned Clane a draw in Round 1 of the Senior Hurling League at Ardclough.

Ryan’s injury time strike rewarded Clane’s battling spirit in the second half, as they clawed back a five-point deficit.

Ardclough couldn’t see out the Clane challenge in the second half hitting a number of wides, while Clane hit five unanswered points.

Cathal Fenton got the hosts scoring underway, his point coming in less than a minute after the throw-in, and Ardclough added two more soon after.

Clane got off the mark with a Dave O’Flaherty point, and John Cooney added another shortly after. A brace of points from Tony Spain gave Ardclough a three-point advantage but Clane were making their presence known more as the half grew on.

The performances of David Cafferty, Ciaran Brady and Danny Horan boosted the visitor’s chances, and it was Horan that provided his side with hope, the half-back hitting two long-range points.

Ardclough rallied in the closing minutes of the half with points from Brendan Byrne, Paul Hogan and Seán Buggy giving them a four point lead at half-time.

When play resumed two Ardclough scores were quick in arriving. Seán Buggy added a point from a ’65, while Tony Spain got another from play.

From there on in it was all Clane however, as Ardclough faded majorly in the second half, only managing one more point for the 30 minutes of play.

Clane’s David Gibbons was one of the main leaders of the fightback, hitting three points to narrow the gap.

David O’Flaherty continued the assault with his fifth point of the game, to leave Clane needing a single point to earn a draw.

And in a very tense final few moments Shane Ryan drove over his long-range effort to draw the game in injury-time just before the final whistle.