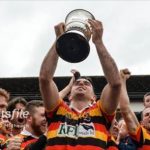 Ardclough claimed the Senior Hurling title in the final in Newbridge on Sunday when they beat hot favourites Naas to lift their 13th title, and first since 2006.

Naas got a great start as Richie Ryan rattled the back of the Ardclough net after just two minutes. He added a point a minute later to settle Naas into the game but with Paul and Martin, Fitzgerald starting to come into the game Ardclough came right back into the game.

The goal was the only difference between the teams at half time as Naas led 1-8 to 0-8.

After Paul Fitzgerald and Ryan swapped early scores, both teams were reduced to 14 men when Ardclough’s Johnny Reeves and Naas’ Kieran Maher were sent off for an off-the-ball incident.

Paul Fitzgerald then levelled the game for the one and only time with a 39th minute goal. He then added a point a minute later to put Ardclough ahead for the first time and from there, they never looked back.

As well as the two Fitzgerald’s, Colm Buggy hit two important scores late on. Naas did get back to within a point at one stage but Ardclough had moved into another gear and a frustrating day for Naas saw them finish the game with 13 men following a red card shown to Jack Sheridan in injury time.