Ardclough lost out by the narrowest of margins in Round 1 of their Senior Hurling League Division 1 tie in Coill Dubh.

A second half comeback allowed Coill Dubh to eventually reel Ardclough in and claim a late victory.

In cold and windy conditions Coill Dubh scored the winning point with 3 minutes to go on the clock.

This result seemed unlikely following the first 40 minutes which were completely dominated by Ardclough with a strong wind at their backs. 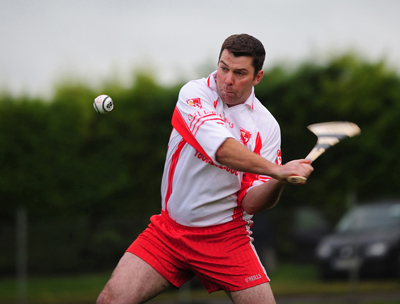 Following the break Ardclough remained dominant and tagged on another two points, thanks to Coulston and Spain, during the opening ten minutes.

But they failed to score for the remaining twenty minutes as Coill Dubh began clawing their way back into the game.

Three quick scores from Coill Dubh turned the tide of the game and with the wind in their sails Coill Dubh tacked on scores without reply.

Ardclough missed vital scoring opportunities and could not add to their total.

Then as the light began to fade a run of points from Barry Cahill and Ryan Casey saw Coill Dubh run out winners by the slimmest of margins.